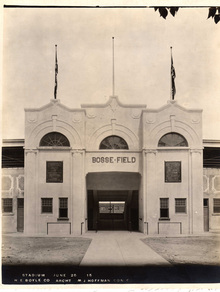 When it opened in 1915, Bosse Field looked different than it does today. The stucco façade seen here was later replaced by brick.
(photo courtesy of the Willard Library archives)
Excerpt from Local Legends I - "Bosse Field"

Whether it be from private boxes or the cheap seats, locals were very fortunate to watch some of the best players to ever step on a field.  Among those to walk through the portals at Bosse Field were hall of famers Sam Thompson, Hank Greenberg, Warren Spahn and Oakland City's own Edd Roush.  Other greats who have played there are: Don Mattingly, Andy Benes, Jack Morris, Lance Parrish, Darrell Porter, Jim Nettles, Cotton Nash, Kirk Gibson, Mark ‘the Bird’ Fidrich and Del Crandall , to name a few.  Cincinnati’s Big Red Machine once appeared for an exhibition game, giving fans a glimpse of Johnny Bench, Joe Morgan, Tony Perez and Pete Rose.  Evansville has had its share of great managers as well, like Jim Leland and Bob Coleman.  Even the popular Bob Uecker came to town, and he probably sat “in the FRONT ROW”, to steal a line from his classic TV commercial.